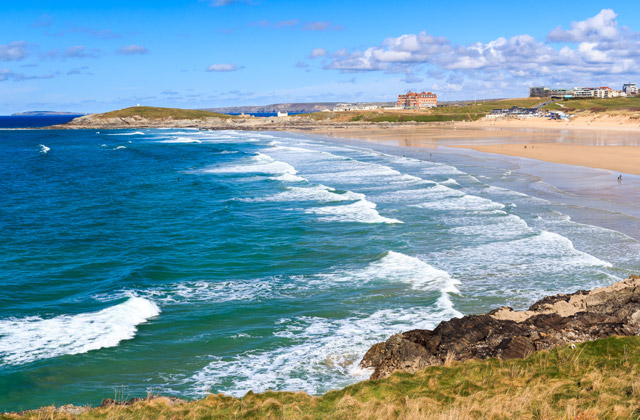 Because Fistral is west-facing, and the Atlantic swells ensure consistent surf waves, Fistral Beach hosts world-class surfing competitions, including Boardmasters in August (Europe’s largest surf and skate festival – definitely worth a visit) and the English National Surf Championships. Perhaps it is also so popular due to “The Cribbar” – where on the north of the beach the waves can reach as high as 40ft! Other features include being a European Designated Beach, (complying with European Water Quality Standards), its state of the art lifeguard station and being home to the British Surfing Association National Surfing Centre. You can imagine the buzz in the middle of summer!

Even if you aren’t a surfer, it’s definitely worth a visit just for the shops, restaurants and cafes. The shops include Ann’s Cottage, a Cornish company that sells gorgeous surf brands, the more well-known Animal and Fat Face, and other trinkety shops with ice creams for the kids!

Over the past few years, Fistral has become a bit of a haven for foodies. Rick Stein has been the latest, offering a surprisingly reasonably priced menu – the best part is that it serves both fish and chips and food inspired by his travels in India, so you can definitely take the kids and enjoy a sophisticated meal yourself in a casual dining atmosphere!

Paul Harwood, a former head chef for Rick Stein is in front facing the sea at Fish House – it opened last year and it’s been packed ever since! The food is refined (definitely one of the best in town), but not overpriced, with mains starting at £6.95. There’s also a great mix on this menu – so be sure to check it out!

If you’re not a fish fan, then maybe head for The Stable, which specialises in cider, pizza and pies, although there are plenty of other options if that doesn’t tickle your tastebuds! A nice touch is that the menu is themed by the venue – why not try “The Fistral Fire” or “The Cribbar”?

Did you know that the Headland Hotel and the cliffs overlooking Fistral were heavily featured in the film adaptation of Roald Dahl’s “The Witches”? Why not pop down and have a look for yourself? There’s plenty to see!