CARBON OFFSETTING AND MUCH MORE

We are proud to say that we have a net-zero carbon output as a business. This is made possible by supporting the worthy charity, the Pole Pole Foundation (POPOF). Based in the Democratic Republic of Congo, the charity protects the rainforests by planting trees for local people to harvest for fuel and food, which discourages them from cutting down these vital habitats. Conserving our planet’s rainforests curbs the impact of climate change —our support alone has helped POPOF plant more than 17,000 trees! POPOF now aims to plant ten new trees for every one harvested.

However, POPOF’s work goes far beyond carbon offsetting. They are gradually growing the buffer zone around the perimeter of the Kahuzi-Biega National Park, creating new habitat and space for agroforestry, which protects the home of the endangered Eastern Lowland (or Grauer’s) Gorilla.

Find out more below… 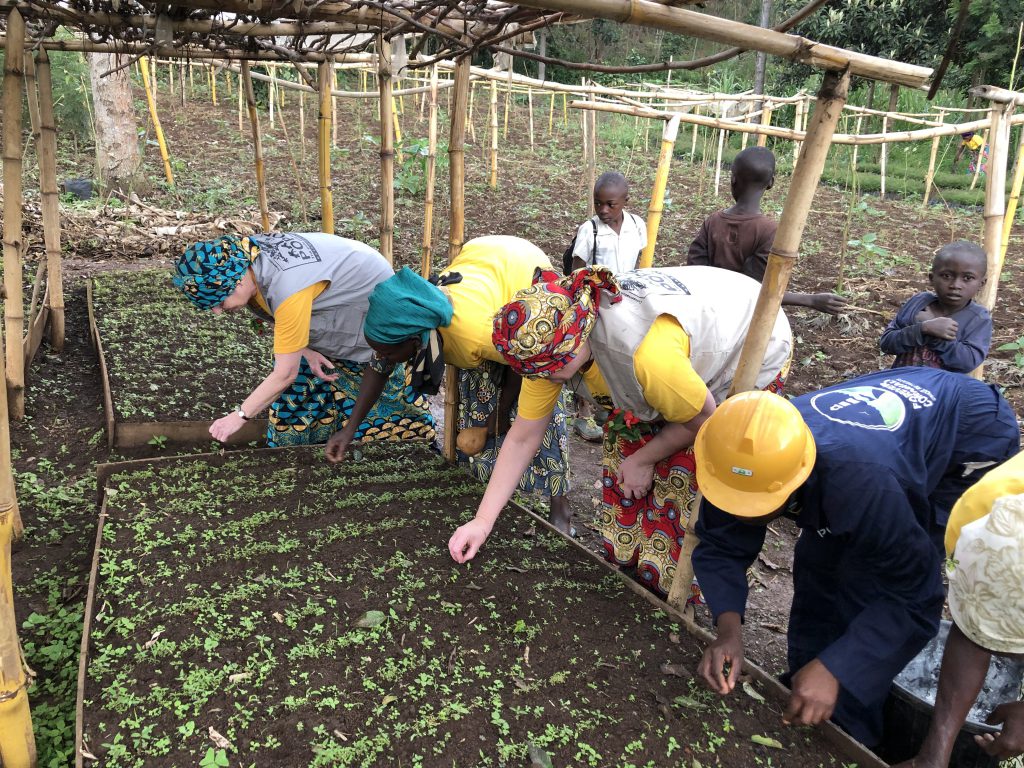 For two years now we’ve been working with the Pole Pole Foundation (POPOF), an award-winning NGO working in the D R Congo (Pole Pole Foundation UK is a UK Registered Charity Number 1173386). Pronounced “polay polay” the name means “slowly slowly” in Swahili — which reflects the NGO’s philosophy of working with the gain of local community and culture, instigating really effective long-term change — for the environment as well as for the people who depend on it for their livelihoods. Since being introduced to POPOF by one of our lovely retreat owners Nikki Jones (also a UK Trustee of the charity) we’ve not only been able to support the tree planting, but have also been able to enjoy sharing stories and happiness on Facebook — it’s a partnership that we cherish, and are proud to shout about. So now is a good time to share more about the POPOF story. The following is taken from an article in the excellent Geographical Magazine and details why POPOF and its founder, John Kahekwa are such unsung heroes… 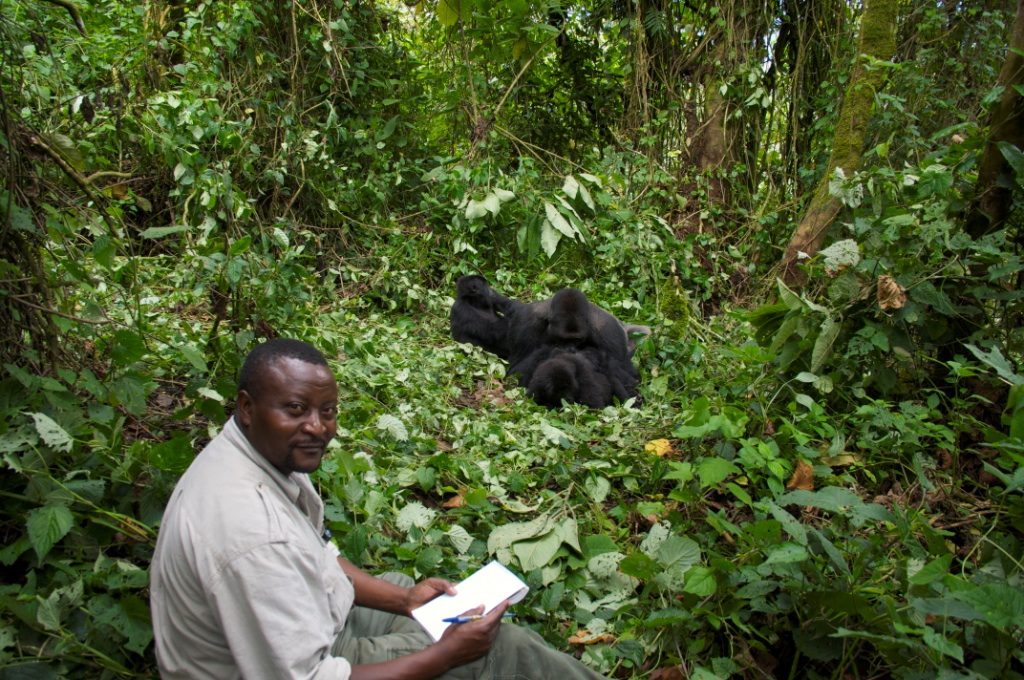 Gorillas and Guerrillas – conservation in the Democratic Republic of Congo

John Kahekwa is the founder and general manager of the Pole Pole Foundation (POPOF), a Congolese run conservation NGO which works to protect the critically endangered Grauer’s gorillas and their habitat in Kahuzi-Biega National Park (KBNP), and to support the sustainable development of surrounding communities. ‘The problem is that those with guns who destroy the environment get rich, while we who protect the environment remain poor.’ These words from John Kahekwa, the winner of the 2016 Tusk Prince William Lifetime Award for conservation in Africa, sum up the challenges of protecting endangered species in the Democratic Republic of Congo (DRC).

The Grauer’s gorilla species was added to the IUCN Red List of Critically Endangered Species in 2016, after a census found their numbers had declined from around 20,000 members before war broke out in the DRC in the 1990s, to under 3,000 today. The gorillas remain under threat; their habitat is being destroyed for charcoal, timber and to develop mines for valuable minerals, and many gorillas are falling victim to the bushmeat trade, caught in traps laid by impoverished poachers.

With little funding available for conservation work, a negligible tourist industry due to ongoing security fears, and the challenges of working in a country ranked close to the bottom of the Human Development Index, saving the Grauer’s gorillas and their habitat in eastern DRC is one of the great conservation challenges of the 21st century. It is a challenge that John Kahekwa and POPOF are meeting head-on. 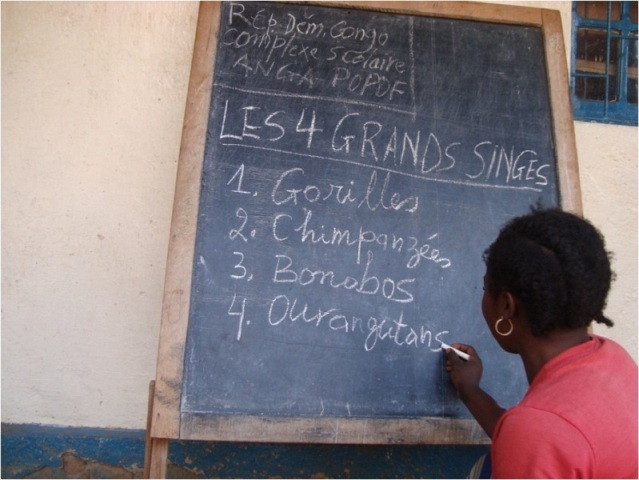 The Pole Pole Foundation (POPOF) was founded 25 years ago, when John was working as a ranger in KBNP. ‘I was doing daily patrols and collected thousands of snares, and found five young gorillas that had died in those snares.’ he says. ‘I found out the snares were being laid by people from the local communities, so I asked them, “why do you lay these snares?” They replied, “empty stomachs have no ears. We need jobs.”’

At that time, John had saved $6,000 from a small business he had started, selling souvenir t-shirts to tourists he took to visit the gorillas. ‘My wife wanted us to buy a house, but I felt guilty. I thought, “if the gorillas could speak a human language, they would say I am a bad man; I make money taking people to see the gorillas but I keep it all to myself.”’

So John used the money from t-shirt sales to create POPOF, to work with communities to protect the gorillas. The aim of the foundation was to work slowly but surely to help the communities and protect the gorillas. POPOF worked well for several years, but then war came to the DRC. The aftermath of the 1994 Rwandan genocide led to an invasion of the Congo, which sparked a conflict that would claim over five million lives in the following decade, and which continues to create insecurity in the country to this day. In spite of the danger to himself and his family, John stayed in the DRC and kept monitoring the gorillas as best he could. 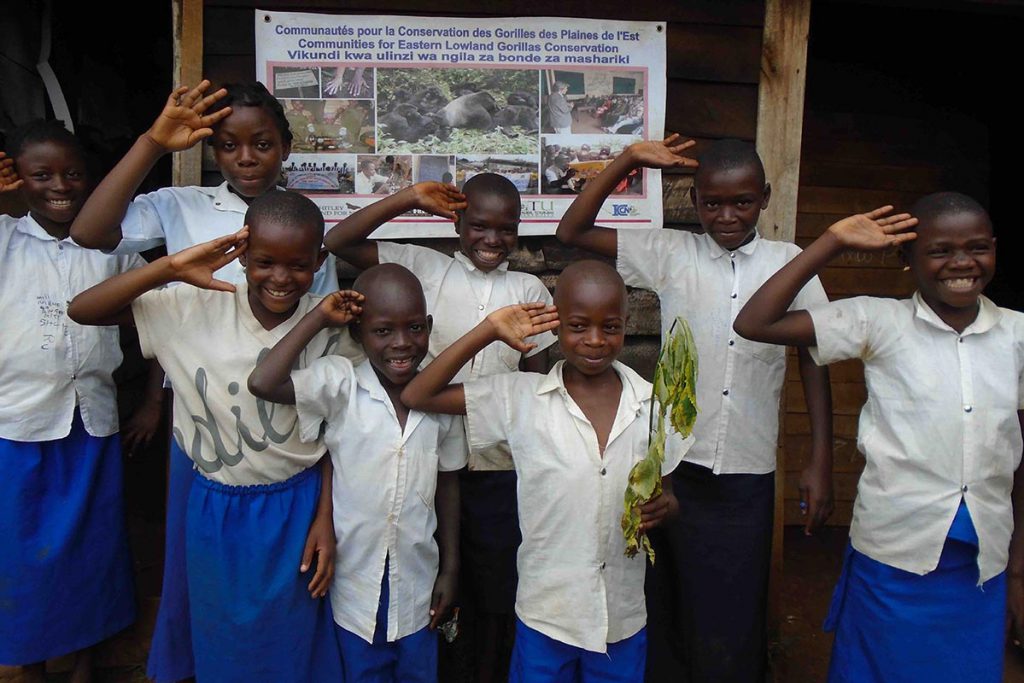 Many of his most-loved gorillas that he had known for more than a decade, were killed during the conflict, but John refused to give up. When a semblance of peace returned, John restarted POPOF’s programmes and has continued to develop and expand those programmes over the last decade.

POPOF has achieved great success in this period. It has planted over four million trees, creating a buffer zone between the park and the community and a sustainable source of charcoal and timber that keeps the forest in KBNP protected. It also runs three schools to teach hundreds of children each year the conventional national syllabus as well extra environmental education, including agroforestry, and runs livelihood projects to provide ex-poachers with alternative sources of income.

When working in as challenging an environment as the DRC, you need people with grit, determination and innovation – something that John has in abundance. John founded POPOF with revenues from his entrepreneurial activity 25 years ago, and has continued to innovate since then, finding new ways to meet the needs of local communities, to mobilise revenue for POPOF’s activities, and to bring tourists back to see the gorillas. 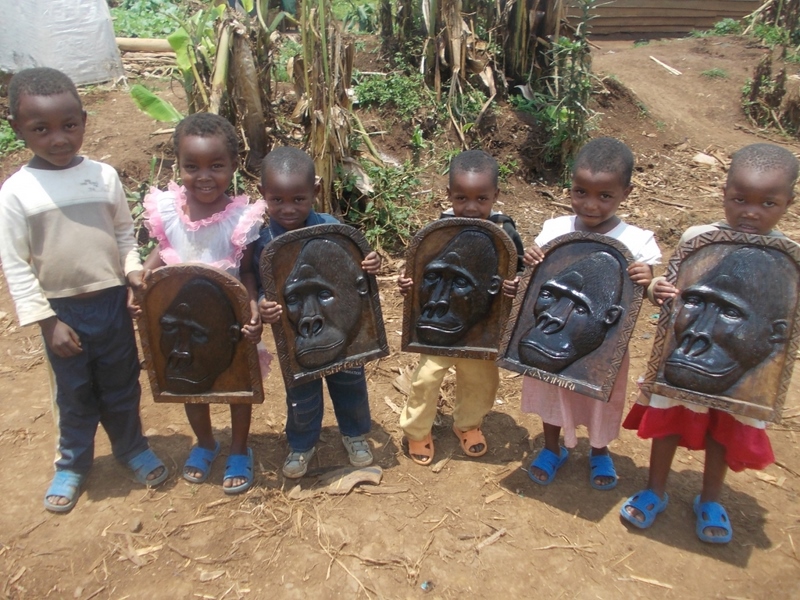 POPOF has recently launched a number of innovative projects to protect the gorillas and support local communities. They have created a Spirulina nutrition project, creating ponds where the highly nutritious algae is grown and harvested and then distributed to malnourished children. The project has been a great success in the early stages, and they are now looking to expand; Spirulina holds the potential to provide a low-cost and versatile solution to end hunger in many of the poorest parts of the world, and it reduces demand for bushmeat, helping to protect the gorillas.

And it is helping inspire a new generation of Congolese conservationists through a social tourism programme, taking people from local communities to visit the gorillas. John explains, ‘It seems unjust that the only people visiting the gorillas are wealthy people from outside Congo, while those who are the neighbours of the park cannot afford to see the gorillas. Our social tourism is a new approach that will create an awareness in the hearts of the communities and they will know the importance of protecting the fauna and the flora in the park.’

POPOF has also worked with the Marjan Centre for the Study of Conflict and the Non-Human Sphere, a research group within King’s College, London, to develop a new type of carbon offset programme. ‘We don’t want to just ask people for donations all the time,’ John explains, ‘we also want to provide a service. If we can raise money from offsetting emissions, that is a service, and it is a story; we think knowing the money is saving the lives of gorillas and the children we work with will inspire more people to offset their emissions.’ 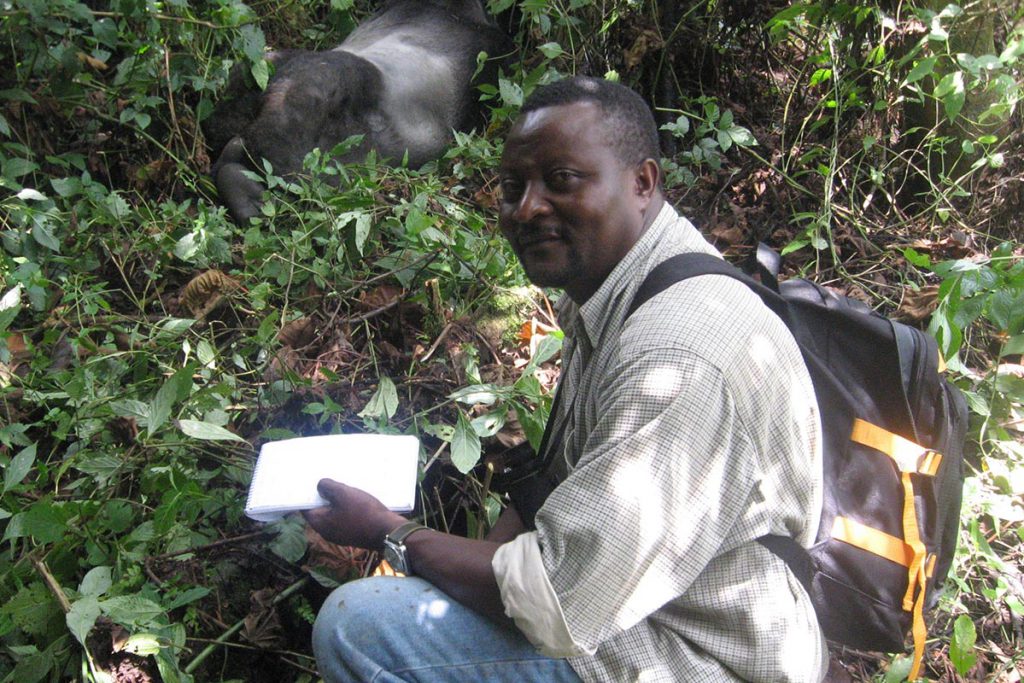 The carbon offset scheme aims to put a ‘face on a ton of carbon’; offsetting carbon emissions through projects such as tree planting but also mitigating the impacts of climate change on wildlife and poor communities by funding projects related to conservation, health, education and development. The project has been established at King’s to explore the possibility of an internal carbon offset programme that reduces the university’s impact from international travel.

Later this year Wild Frontiers, the London-based adventure travel operator which specialises in opening-up previously off-limit locations to tourists, is launching the ultimate primate safari, offering people the opportunity to visit the gorillas with John as their exclusive guide, to provide a unique experience to see the gorillas and the behind-the-scenes work needed to protect them. ‘This new safari is exciting for us and for the park. There have been too few tourists for too long. If these trips can help bring more people to see the gorillas, I think it will help to secure their future, as it has in Virunga [with the mountain gorillas].’

In spite of John’s work, many challenges remain. Security has yet to fully return to the DRC, and the country has been called the ‘rape capital of the world’. Many rangers have been killed in the line of duty and the murmurings of disruption emanate from Kinshasa over the recent disputes about when the next election will take place. Conflict minerals – such as the coltan used to make mobile phones, which are mined in parts of KBNP – remain a problem, funding rebel groups and corruption in the DRC and threatening the gorillas and those who seek to protect them.

It is one of the most challenging regions of the world to work in, but POPOF’s work is giving the Grauer’s gorillas a good chance of survival. In a country often referred to as the Heart of Darkness, John Kahekwa and the work of the Pole Pole Foundation is a shining beacon of hope.