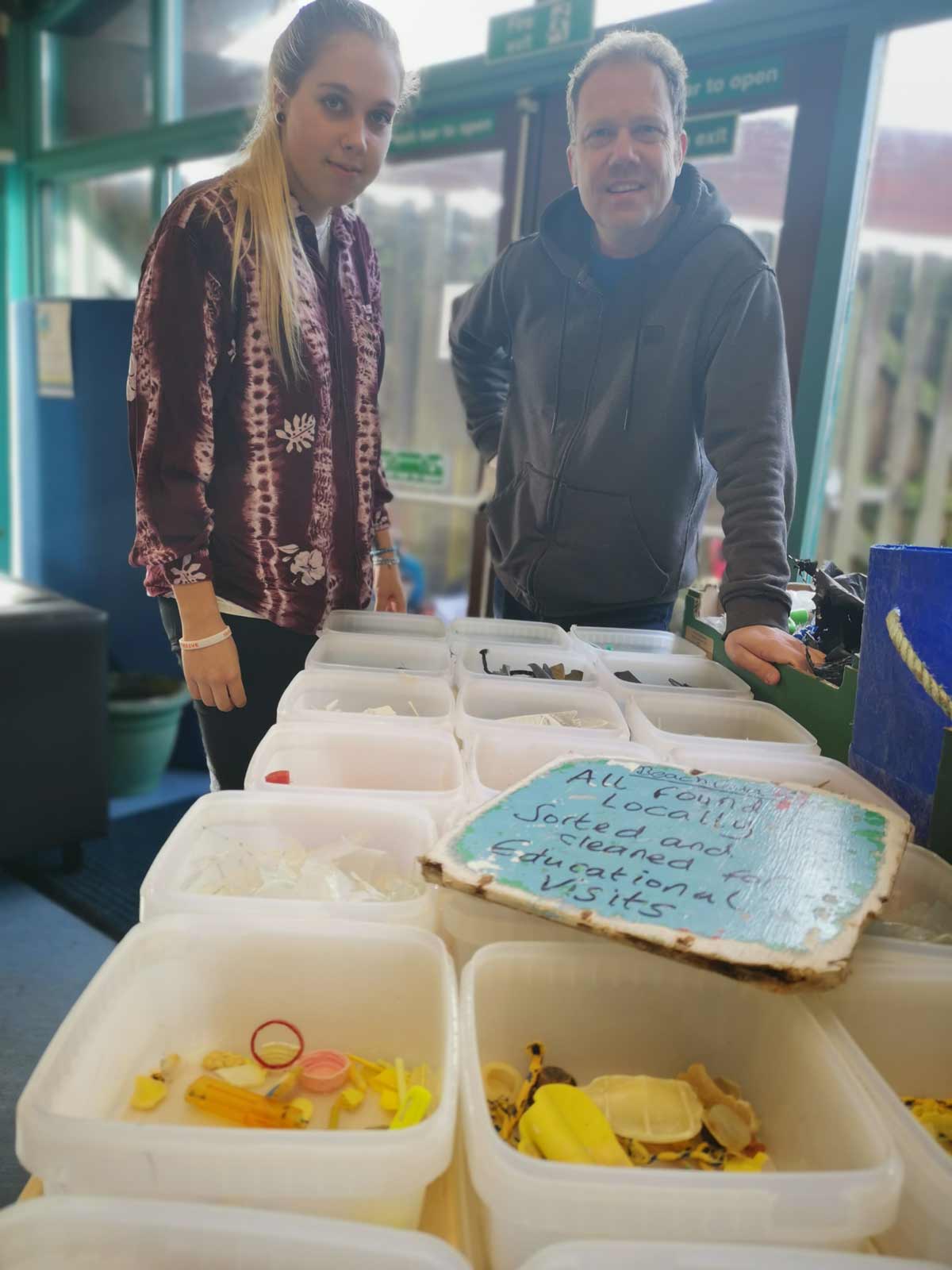 Emily and Rob Stevenson, AKA Beach Guardian, with plastic debris, collected from beaches in North Cornwall — washed, sorted and destined for creative school workshops to raise awareness about plastic pollution.

Like countless other children growing up in England, Emily Stevenson holidayed regularly in Cornwall, playing on the beaches of North Cornwall and falling in love with the culture, the lifestyle and, particularly, with the sea.

Unlike others, whilst playing on the beach Emily developed a bit of a habit, with her dad Rob, of collecting other people’s rubbish. The family moved to Cornwall, a school project at age 11 involved creating artwork from things found on the beach, and Emily’s interest deepened, leading her to study Marine Biology at Plymouth University.

Dad and daughter continued to clean beaches, posting what they had found on Facebook. Emily found a crisp packet with a ‘best before’ date of 1997, the same year Emily was born. That post went viral, and Emily was featured on the front page of the Daily Telegraph. The message was clear — plastic does not go away. It remains in the environment for thousands of years, and it’s out of control.

Beach Guardian stepped up their campaigning and more publicity followed in September 2018 when Emily wore a dress made herself from Walkers crisp packets to her university graduation, making international news. Walkers responded with the announcement of a nationwide crisp packet recycling scheme as well as a long-term ambition to make all of its packaging 100% recyclable, compostable or biodegradable by 2025. A step forward, but as Emily points out, with Walkers producing 8,000 packs a minute “Between now and 2025 they will have created another 28 billion non-recyclable crisp packets”.

The issue of plastics in the seas is a complex one with far-reaching impact. It’s about far more than keeping Britain tidy. The problem is that in the sea, plastic breaks down into into smaller and smaller fragments. As the objects get smaller, they cause different problems. We’ve all seen the Blue Planet images of marine wildlife strangled by or dead from ingesting plastic objects — you may have read about the whale recently found to have more than 1,000 plastic objects in its stomach — but what happens on a smaller scale is equally concerning. When plastic debris in less than 5mm in size it’s classified as micro-plastic, and at this scale it gets ingested by fish and marine mammals on a huge scale, with toxins passed up through the food chain and causing infertility, threatening entire species at the top of the food chain, like orca.

To find out more have a look at the SAS (Surfer’s Against Sewage) web page — here are some nuggets to get started; every day a staggering 8 million pieces of plastic pollution find their way into our oceans, there may be 5.25 trillion macro and microplastic pieces floating in the open seas… and around 5,000 items of marine plastic pollution have been found per mile of beach in the UK.

Emily and Rob have founded Beach Guardian, a community interest company dedicated to the issue of plastics in the oceans. They campaign tirelessly, work with schools, clean beaches and raise awareness. At the heart of the way Beach Guardian operates is very well informed scientific rigour, combined with creativity and communication. The detritus they collect is meticulously sorted — partly to categorise it by type to build research data, but also in colours so that school children can use it in art projects to raise their awareness about plastic and waste. 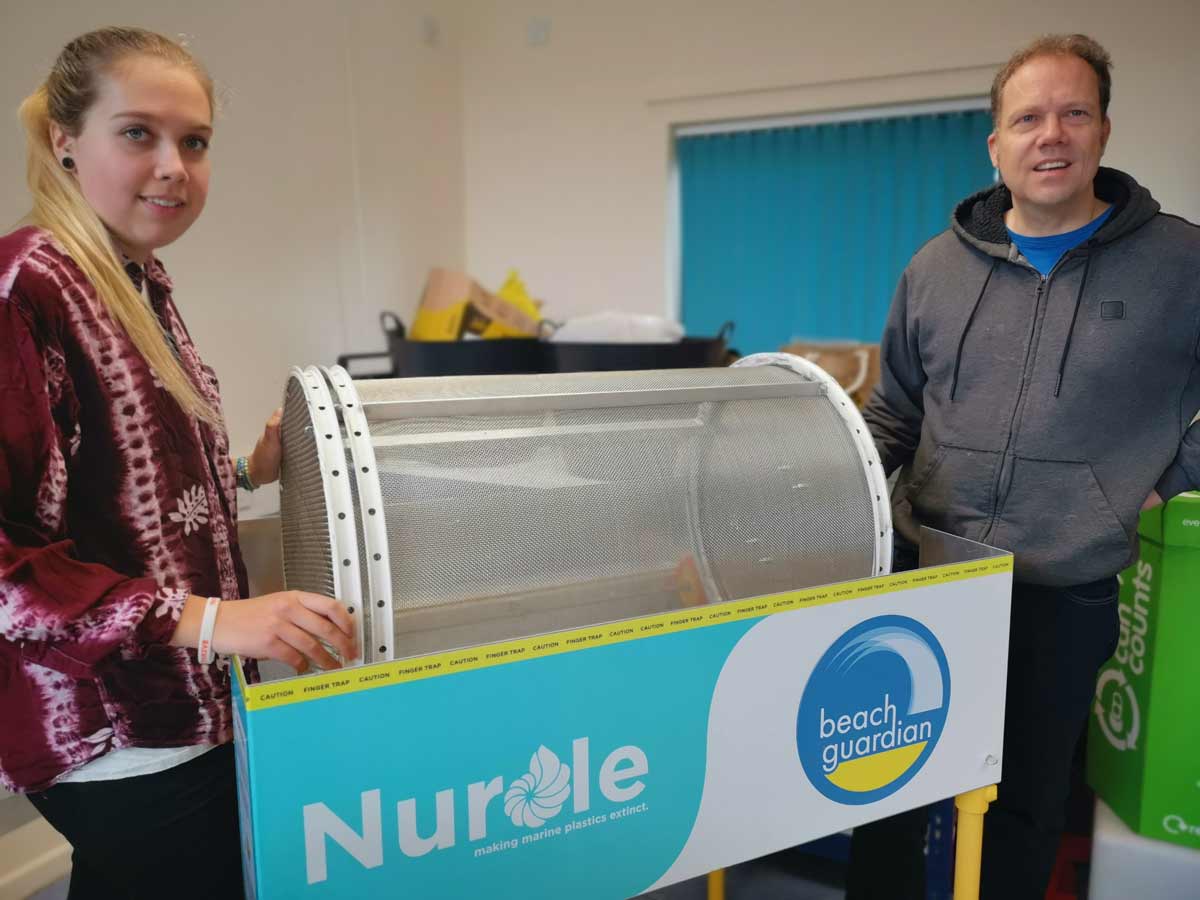 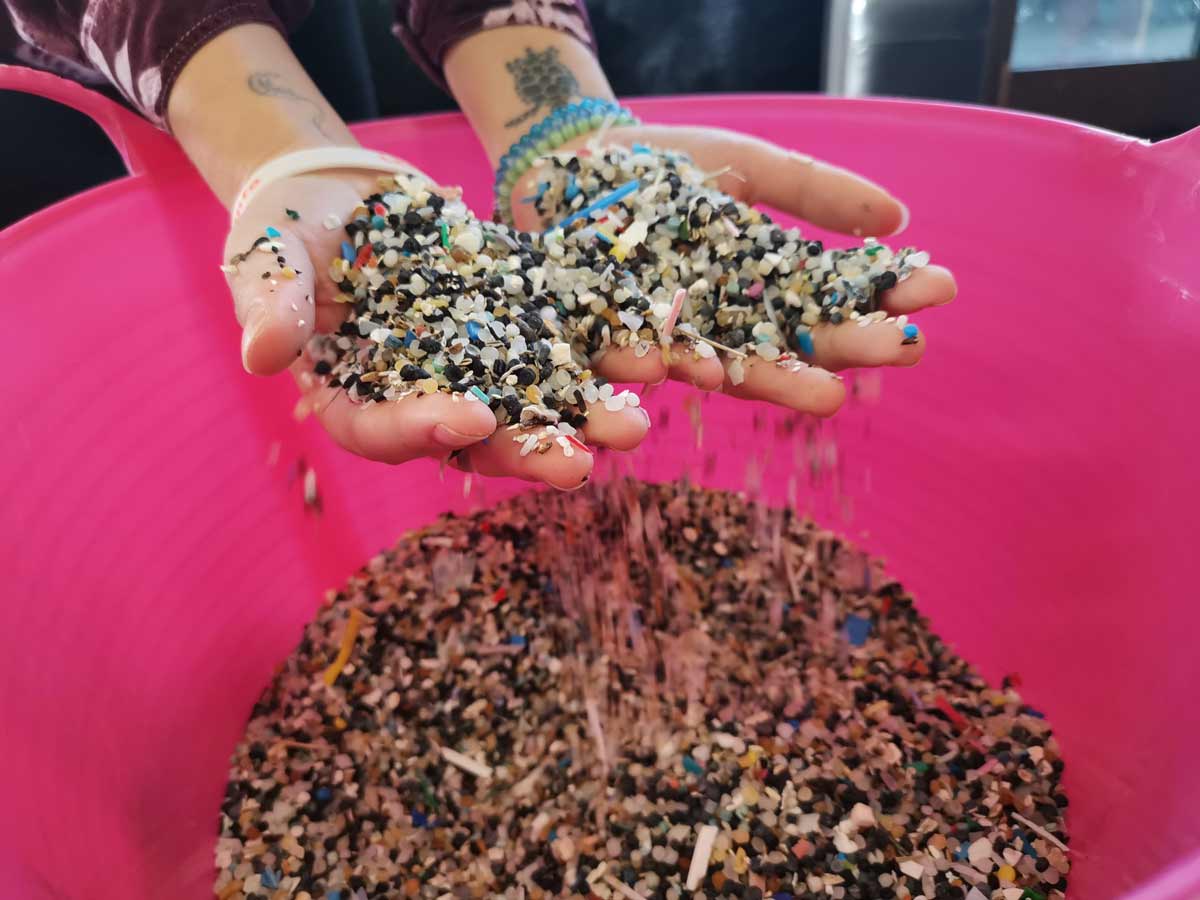 An ingenious machine designed to separate ‘nurdles’ from sand. Nurdles are tiny plastic pellets used in manufacturing. Sometimes whole containers of these are lost from ships, releasing millions of them into the marine environment. They wash up on beaches. Being lighter than sand they tend to accumulate along the strand where it is possible to shovel then into this mesh drum, and sieve them out.

Forever Cornwall feels privileged to be working with Beach Guardian to get the issues better understood, and to champion practical suggestions and measures where we can all can make a difference. Things we can all do start simply; opt for re-useable coffee cups, avoid grab-and-go water and other drinks in plastic bottles, say no to drinking straws, flush nothing but paper tissue down loos — and bring a bucket of plastic back from the beach when you go for a walk. Like Emily and Rob you’ll find it strangely addictive!

Beach Guardian talked to the Forever Cornwall team, cottage owners and housekeepers at the Forever Cornwall forum in November 2018. They made a big impact. We’ll be posting more on this topic, and the Stevenson’s have very kindly agreed to write some guest blog posts for us (they will be able to explain the issues far better than us) — and help us develop projects like encouraging holiday guests (i.e. ‘you’) to get involved with community beach-cleans when you are in Cornwall. It’s actually really enjoyable and is a great way to connect more deeply with people and place.

We look forward to working with Beach Guardian, and with you, for a future that’s cleaner and greener . Or should that be bluer? 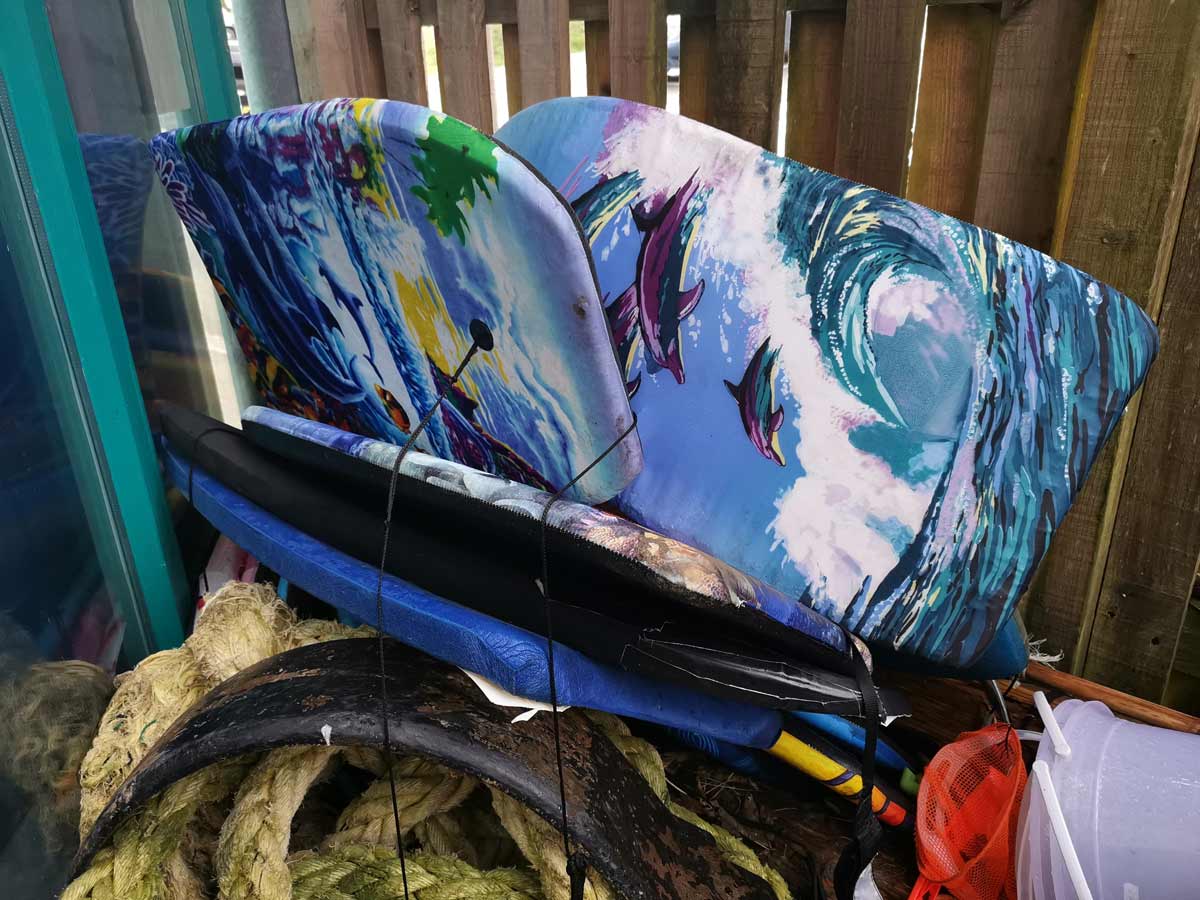 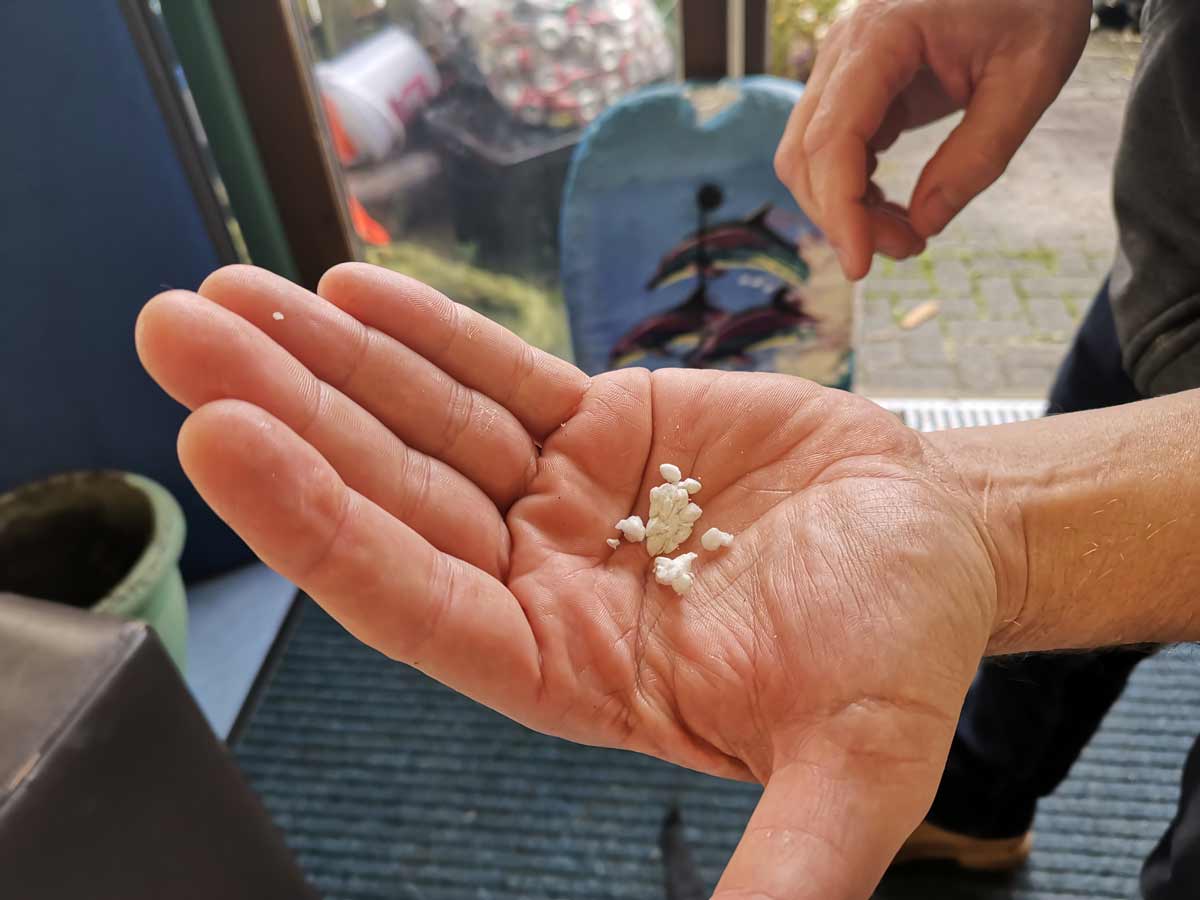 We all love a bodyboard but here’s the thing; the cheap ones are made from expanded polystyrene. They are very tempting to buy but they don’t last long. Often disposed of irresponsibly (and, you might ask, how do you ever ‘dispose’ of a large plastic object that cannot be recycled and will never decompose naturally?) they break down into tiny fragments, just perfect for filter-feeding fish, marine mammals and birds to ingest. Hardly a tasty snack — and in many cases leading to death.